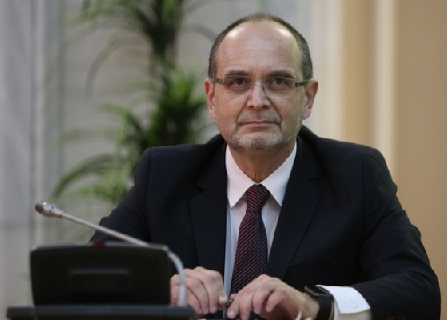 Adrian Curaj is a professor of Research Management at the POLITEHNICA University of Bucharest. He is also the Chairholder of the UNESCO Chair on Science and Innovation Policies at the National School of Political Studies and Public Administration.

Adrian Curaj is the General Director of the Executive Agency for Higher Education, Research, Development and Innovation since 2010. He was acting as the Romanian Prime Minister’s Advisor on Science, Technology (2007-2008), and as the State Secretary for Research, Ministry of Education, Research, Youth and Sport in Romania (2009-2010) and as a Minister for National Education and Scientific Research (2015-2016).

Adrian Curaj has been working as a consultant with World Bank, UNESCO, UNIDO and EC for studies in Tertiary Education, Science and Innovation, and Foresight. He is a member of the Romanian Commission for UNESCO, a member of the Board of Directors of the U.S. Fulbright, and of the member Commission in Romania, a member of EFFLA-European Forum for Forward Looking Activities since 2012.

Adrian Curaj was acting as project leader for many projects including Foresight in Science and Innovation (2005-2006), Foresight in Higher Education (2009-2011), and research infrastructures – “Research Infrastructures: Foresight and Impact -RIFI” – EC- FP7 project (2009-2011). He is a member of the advisory board of the ETF – FRAME: Skills for the Future project since 2012. Adrian Curaj has published in reputed scientific journals as well as several books, most of them in research and higher education management, and foresight. Two of the inventions he is co-author received gold medals at the Geneva Invention Salon 2009 and 2013.

All sessions by ADRIAN CURAJ

Part I: Clusters in international context