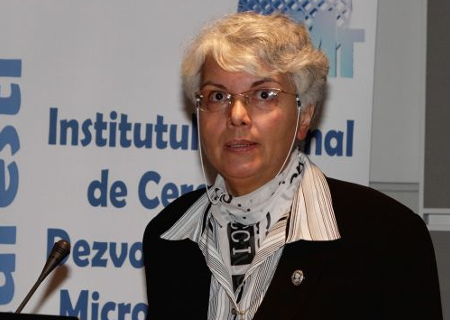 Dr. Rolanda Predescu is a former director general (till 2015) of the General Directorate for R&D Policies and Programmes in the Ministry for Research and Innovation in Romania.
As Romania’s CREST/ ERAC representative during 2001-2014, she has been directly and permanently involved in the development of policies supporting the harmonization of the Romanian R&D and innovation system with the EU R&D policies orientations.
Mrs. Predescu graduated with a doctoral degree from the Faculty of Mathematics at the University of Bucharest in 1976. The first part of her career was dedicated to research in the field of computer science, at the National R&D Institute for Informatics in Bucharest.
In 1993 Dr. Predescu began work as a senior S&T policies expert at the Ministry of Research and Technology at the time. Since 2001 she was appointed to high level management positions in the government authority responsible for R&D and innovation policies, organized in various forms during time (the Research Division in the Ministry of Education and Research, National Authority for Scientific Research and Innovation, the Ministry for Research and Innovation at present). Her main responsibilities included the coordination of activities related to the formulation of national R&D policies and strategies, and to the elaboration of national R&D programmes. She is currently a senior counsellor for RDI policies and programmes in the ministry.

All sessions by ROLANDA PREDESCU