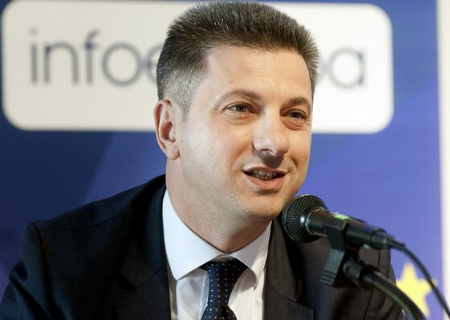 Georgian Ghervasie, Commissioner General for the representation of the Romanian Government concerning participation in Expo Milan 2015, was appointed under the Prime Minister’s Decision no. 214/2013. From July 2012 until October 2013 he was counsellor for promoting the business environment at the Prime-Minister’s Chancellery; between 2009 and 2012 he held the position of Director General for communication and public relations at the Senate of Romania. Previously he was Governmental expert, advisor to the Secretary General of the Romanian Government and coordinated the Inter-ministerial Council for promoting Romania’s Image Abroad.

In 1996 he graduated from the Faculty of International Economic Relations at the University of Economic Studies in Bucharest, and in 2004 he received a Ph. D. in Economics with the thesis „The Establishment and Development of Specialized National Institutions promoting Romanian International Economic Relations”. The courses attended include: training in foreign trade at Trieste, Ancona, Pescara, Bari and Rome; Italian Monetary Policy – Faculty of Economics and Trade, Perugia; Quality Manager (ISO) at the – European Organisation for Quality. He performed several research programs with different themes and earned awards at sessions organized by academic institutions.

All sessions by GEORGIAN GHERVASIE

Creativity and innovation in the Agro-food sector Event (Optional)